While visiting England this summer, we took a day trip to Cambridge, where we came across a unique memorial to World War II air crews.  During the war, Cambridge had a number of airfields in its vicinity, and airmen from Britain’s Royal Air Force and the U.S. Air Force frequently relaxed at the city’s Eagle Pub. Particularly popular was a bar at the back of the Eagle, now known as the “RAF Bar.”

It’s said that in 1941 or early 1942, an airman balanced a chair on a table in the bar and stood on the chair. Using his lighter, the airman burned his squadron’s number into the bar’s ceiling. Other airmen followed his lead and over time, the bar’s ceiling and walls became decorated with names, slogans and squadron numbers. Perhaps, knowing they might not return from dangerous missions, the airmen wanted to leave their mark.

The ceiling has been fully restored.  The Eagle’s pints are good too! 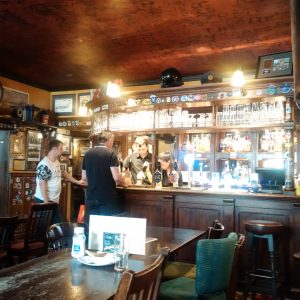 Wonderful article about the book launch for Exile Air, by Mark Clairmont in the July 27, 2017 edition of MuskokaTodaily.com!  Visit the article

Here are Mike Filey’s comments about Exile Air in his July 9, 2017 column, “The Way We Were,” in The Toronto Sun online.

On the subject of early Toronto airfields, one must not forget the one used by members of the Royal Norwegian Air Force during the darkest days of the Second World War.  Though officially known as Port George VI Island Airport (named in anticipation of the planned 1939 visit to the city by King George VI and Queen Elizabeth), it wasn’t long after the Germans invaded Norway that the Canadian government assigned property here in Toronto for the use of members of the Norwegian Air Force to help them “get back into the war.” Soon, the Island airport and various ancillary buildings erected at the foot of Bathurst St. became collectively known as “Little Norway.” Now, thanks to author Andrea Baston, this little known part of the early 1940s history of our city (and after 1942, that of the citizens of Gravenhurst, Ont.) played during those stormy war years can be found in her new book, Exile Air.  For more information on the availability of Andrea’s book, visit oldstonebooks.com.

GRAVENHURST – The tale of Little Norway is about resistance of exiled Norwegians who travelled halfway around the world to train as pilots to take back their country from the Nazis.

Exiled Air is 240 pages of an intriguing story about Norwegian resistance fighters who escaped and came to Canada to train as fighter pilots in the Second World War. Andrea Baston and Candis Jones have done a superb job writing and depicting the events.

Exile Air is their story and it’s being told in a book launch Saturday afternoon, 1-3 p.m., at the Opera House.

Andrea Baston and Candis Jones knew the basic facts, growing up in Gravenhurst where Little Norway had a huge presence here and in Huntsville – as well as Toronto and Emsdale first.

But what the two women didn’t know were the amazing details.

“It’s a really great story, it would make a great movie,” said Jones, who still lives here with her husband, Bob Olafson, whose father Harald was a flight instructor at Little Norway.

And Baston, whose mother, Una, was a history teacher at the high school, laughed that she may have missed that day’s lesson about the Second World War and Norway’s participation locally.

War was on the doorstep of Gravenhurst, which had a German Prisoner of War camp on Lake Muskoka, Camp 20, which was twice chronicled by the late Cecil Porter.

Little Norway was less known about 75 years after it opened at what is now the Muskoka Airport. A district celebration marking the anniversary last week drew little notice.

Odd given its historical importance, and that it received the King of Norway to lay the cornerstone of a new terminal, including a state dinner.

Now, author Baston and photographer Jones have gone beyond scratching the surface.

“I really wanted to paint the whole picture,” said Baston.

“I just had to write about it,” said the retired lawyer, who still weekends from Toronto at her parents’ former house.

That’s the way she and Jones felt about their first publishing adventure with Old Stone Books, Curing Tuberculosis in Musokoka: Canada’s First Sanatoria, about the Muskoka Sanatorium.

Jones said “My family wouldn’t be here if it wasn’t for Norwegian air training in Canada.”

She married a son of a Little Norway veteran.

Baston was particularly taken how the Norwegian patriots escaped and how the royal family spirited the crown’s gold out to the north of the country, then to Britain and eventually to deposit in Ottawa and New York for safekeeping till the end of the war.

“It shouldn’t be forgotten,” said Baston, adding it’s known in Norway, but less so in Canada.

After Norway surrendered to Germany June 10, 1940, many young Norwegian “patriots” escaped by fishing boats across the North Atlantic or made their way by bus, plane and train via Russia, Turkey, Egypt and down around the Cape Town and back up to Canada to join a fledgling Norwegian air force taking shape at the Toronto Island Airport.

Doing the research, among the myriad of amazing details, Baston said she was taken by a plane crash that took the lives of two Norwegian pilots who died while training there when their plane clipped the top of a ferry and crashed.

Baston found the coroner’s report that was critical of the flight centre’s location and said “it was only time before a plane came down on the streets of Toronto,” said Baston Friday.

That’s how Little Norway ended up in Gravenhurst, on Jan. 1, 1942, with 60 Cornell Fairchild planes.

Three of the training planes were paid for by the pilots themselves, and were famously dubbed ‘Spirit of Little Norway’ painted on their fuselage.

Up at Camp Vesle Skaugum northeast of Huntsville, on Long/Dotty Lake at Limberlost north end of Oxbow Lake, pilots and air support workers trained and had R&R space.

There are stories about dances at the old Vincent’s Restaurant (Bethune Bistro now) and how they were “quite something,” Baston says.

And how many pilots fraternized with the local young women.

Much of the story comes from a couple of the pilots.

Rolf Kristian Hauge is 98 and lives in Collingwood.

Three months after surrendering to Germany, Norway set up Little Norway in Toronto.

Seven months later they had a Norwegian squadron of pilots join Britain’s RAF to begin the fight that would regain them their homeland.

On Feb. 21, 1945, a fire took place at Little Norway, where pilots were housed in log buildings.

Exile Air is another interesting local tale told well with great context and illustrated informatively with rarely seen photos, and maps that help inform the narrative.

It would be a great read for local history classes in Muskoka, including Bracebridge, which has taken a leading role in continuing to foster relations between Muskoka and Norway.

The book will be on sale at the launch Saturday and afterwards in Gravenhurst at the Muskoka Steamships ticket office, the Discovery Centre museum at the Muskoka Wharf and Muskoka Bay Clothing.

In Bracebridge it’s at the Veranda; in Huntsville at Coles; in Port Carling at the Muskoka Lakes Museum; and in Orillia at Mandicore.

Delivery day for copies of Exile Air at Muskoka Bay Clothing, 165 Muskoka Road South, Gravenhurst and at the Shipyards Muskoka! Thanks to Judy Terry for posting this fun photo of Dani and me!

Thanks to everyone who came to the launch for Exile Air, on July 8, 2017 at the Gravenhurst Opera House!  We had a wonderful time! 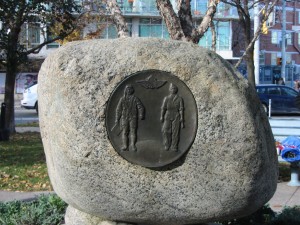 Norway’s Crown Prince Haakon and Crown Princess Mette-Marit visited Little Norway Park in Toronto on November 9, 2016. The Royal visitors took part in a commemoration of the legacy of the Royal Norwegian Air Force’s training camp, located first in Toronto and then at Muskoka Airport.

The Town of Gravenhurst is seeking interested partners to acquire and redevelop the land upon which Canada’s first tuberculosis sanatorium, the Muskoka Cottage Sanatorium, was located. As noted in the August 4, 2016 Gravenhurst Banner above, expressions of interest are due by September 16, 2016.

Let’s hope some substantial proposals benefitting the community are submitted!